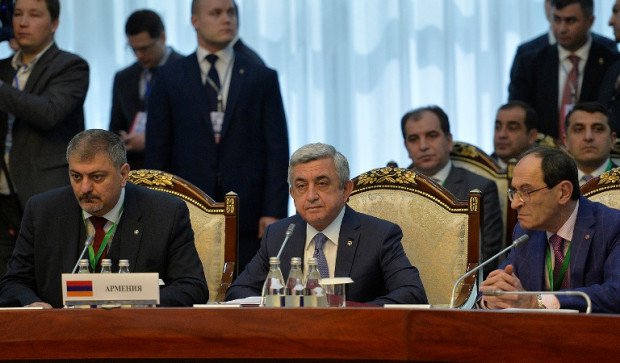 Armenia’s turnover with the other Eurasian Economic Union (EAEU) countries grew by more than 15 percent, and the export of the Armenian goods to the Eurasian market grew by 65 percent.

President Serzh Sargsyan stated the aforementioned during his address at Friday’s meeting of the Supreme Eurasian Economic Council.

“Before referring to one or two issues presented for the discussions at the plenary session of the Supreme Council, I would like to express my sincere gratitude to the President of Kyrgyzstan Almazbek Atambaev for organizing today’s meeting at such a high level, as well as for the hospitality and warm welcome.

“The shaping of our common economic area and its development for the second year in a row is taking place in a complex global economic situation which is manifested in the decreasing tempo of the global economic growth and geopolitical convulsions. All this on one hand creates certain problems for the full-fledged functioning of our Union, on the other hand it opens new opportunities for a closer cooperation of our countries.

“Under these conditions, the concerted steps taken by our countries allowed the member state to stabilize to some extent the situation, to achieve the macroeconomic stability through the assistance to some areas and branches, which has translated into the tendency of growth in some countries in the areas of industrial and agricultural production. In particular, in 2016 the gross domestic product indicators in Armenia showed positive dynamics; there was registered the increase of activities in the production, agricultural, and service areas. Armenia’s turnover with the [other] EAEU countries grew by more than 15%, and the export of the Armenian goods to the Eurasian market grew by 65%. There was registered the increase of the turnover with third countries as well.

“Our countries have similar goals for development which we, in particular, see in the introduction of industrial innovations, high technologies in the area of agriculture, digitalized economy, and renewable sources of energy. It is also important to make concerted efforts aimed at the implementation of the mutually beneficial cooperation programs. We have two main objectives: First, to fortify the Union from within, further liberalize our common economic area through the elimination of the barriers, reduce exemptions related to the free move of goods, services, capital, and labor. Second objective is the amplification of the EAEU’s international engagement. These two objectives complement each other and affect the efficiency and international standing of the Organization.

“From the viewpoint of further strengthening of the international standing of our integration union, we attach great importance to the invigoration of the EAEU cooperation with the third countries which are ready for a true partnership, and with pivotal integration units. In 2016, issues of cooperation with Iran, China, India, Egypt and some other countries were discussed in a constructive spirit. Armenia is interested in securing these agreements legally, particularly with the Islamic Republic of Iran with which we have pragmatic, mutually beneficial, and good neighborly relations.

“From this point of view, we assess positively the cooperation process between the Eurasian Economic Commission and European Commission as an important factor for the promotion of a dialogue between the two integration unions which will be conducive for the exchange of experience, exploration of the avenues for integration and cooperation, and a harmonious, complementary and mutually beneficial development.

“The efficiency of the EAEU is also dependent on the smooth and coordinated works of the state bodies of the member states, Eurasian Economic Commission, and business circles. With this regard, we expect that the Eurasian Economic Commission, within the scope of its authority, will provide proposals on the resolution of the problems facing the Union. We also view as important the creation and publishing by the Eurasian Economic Commission in cooperation with the state bodies of the member states of the so called White Book which will present by consent of the parties 60 barriers existing within the Union’s market. I hope that the road map for their elimination with the proper timetable will be created soon.

“Armenia will continue to implement the preset programs aimed at thwarting the negative tendencies present in the global economy, promoting sustainable development, including through the utilization of the integration potential of the Union,” the President of Armenia noted, in particular.